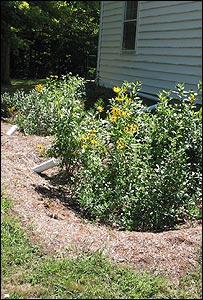 "Rain gardens" can dramatically cut the amount of pollution in urban storm water, according to a study by US researchers.

Most of the rain that falls on cities lands on impervious surfaces, such as roads, where it absorbs pollutants before it finally drains away.The team says a shallow depression in a garden containing bark mulch and shrubs can remove up to 99% of toxins.

The findings appear in the journal Environmental Science and Technology.

Researchers from the University of Connecticut found that the gardens significantly reduced the concentration of fertilisers, oil and particulates reaching storm drains.

Growing problem — Rain gardens, the researchers say, can also help reduce localised flooding by absorbing rain water from heavy downpours, reducing the risk of drains becoming overloaded. For the study, two rain gardens were planted and frequently monitored over a two-year period to see how effectively they absorbed a range of pollutants. One of the authors of the study, Michael Dietz, explained why they carried out the research."The concept of rain gardens has been around for 10 or 15 years but there has not been a lot of research.

"A lot of places are hesitant to use something that has not been verified, so we felt it was an important step to bridge that gap," he told the BBC News website.

The US Environmental Protection Agency estimates that built-up urban areas generate nine times the amount of runoff water than woodlands of a similar size.

As the percentage of the world’s population living in cities continues to grow, the problems of flooding and pollution are set to increase.

"This is one tool that can used to mitigate the impact of runoff water in urban areas. It definitely has worldwide benefits because it is not a local phenomenon; it is going on all over the world," he said.

"Any tool we have that can help reduce the impacts of urbanisation is beneficial for everyone."