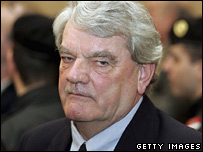 David Irving said his views had changed since his 1989 remark

British historian David Irving is to appeal against the prison term imposed by an Austrian court for denying the Holocaust of European Jewry.

He had pleaded guilty to the charge which arose from comments he made in Austria in 1989 denying the existence of gas chambers at Auschwitz.

Austria is one of 11 countries with laws against denying the Holocaust.

During his one-day trial in Vienna, the 67-year-old historian admitted that in 1989 he had denied that Nazi Germany had killed millions of Jews.

He said this is what he believed, until he later saw the personal files of Adolf Eichmann, the chief organiser of the Holocaust.

"I said that then based on my knowledge at the time, but by 1991 when I came across the Eichmann papers, I wasn’t saying that anymore and I wouldn’t say that now," Irving told the court.

"The Nazis did murder millions of Jews."

In the past, he had claimed that Adolf Hitler knew little, if anything, about the Holocaust, and that the gas chambers were a hoax.

On Monday, before the trial began, he told reporters: "I’m not a Holocaust denier. Obviously, I’ve changed my views.

"History is a constantly growing tree – the more you know, the more documents become available, the more you learn, and I have learned a lot since 1989."

Of his guilty plea, he told reporters: "I have no choice." He said it was "ridiculous" that he was being tried for expressing an opinion.

"Of course it’s a question of freedom of speech… I think within 12 months this law will have vanished from the Austrian statute book," he said.

His lawyer, Elmar Kresbach, said the verdict was "a little too stringent". "I would say it’s a little bit of a message trial," he said.

Mr Kresbach said Irving was unlikely to serve the full three-year term because of various factors, including his age.

"Holocaust denial is anti-Semitism dressed up as intellectual debate. It should be regarded as such and treated as such," Ms Pollock told the BBC News website.

But the author and academic Deborah Lipstadt, who Irving unsuccessfully sued for libel in the UK in 2000 over claims that he was a Holocaust denier, said she was dismayed.

"I am not happy when censorship wins, and I don’t believe in winning battles via censorship… The way of fighting Holocaust deniers is with history and with truth," she told the BBC News website.