A French comedy film showing the Hindu god Lord Shiva being torn up has drawn criticism from a UK Hindu group.

The film’s distributor, Warner Brothers, was not available to comment. 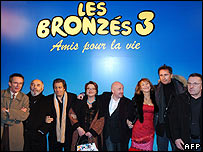 Les Bronzes is a series of French films similar to the UK Carry On movies. Les Bronzes 3: Amis Pour La Vie translates as The Sun-tanned Ones 3: Friends for Life.

The film set record ticket sales for an opening weekend in France.

Objection
"To mock the worship of the Hindu religion, as this French film does, does little to increase understanding our different cultures," said the forum’s secretary-general Mr Kallidai.

He urged people to write to Warner Brothers to complain.

The Greek advert featuring the Goddess Durga was displayed inside and outside an Athens bar.

"I wrote to lodge my disgust at the use of the Goddess Durga, especially as it is against the practice of Hinduism to take any intoxications including alcohol," said Sandhiya Patel, one of the forum’s executives.

"To depict a Hindu Goddess holding bottles of alcohol is extremely offensive.

"The fact that the company has removed the images shows that voicing our opinions can make a difference, it’s just a shame that businesses don’t do their research before implementing such campaigns," she added.

The Hindu Forum of Britain is the largest umbrella body for British Hindus, with more than 240 member organisations from across the UK.