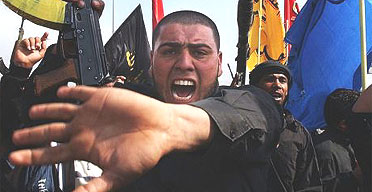 Iraqi Shiite men brandish their weapons and chant slogans as they protest the bombing of the holy Shiite shrine in Samarra. Photograph: Wathiq Khuzaie/Getty Images

Iraq’s political and religious leaders were engaged in a desperate effort last night to stop the country from sliding into civil war after a huge bomb shattered the golden-domed mosque in the city of Samarra, one of Shia Islam’s most revered sites.

At least six people were killed as demonstrations and armed clashes erupted across southern Iraq, and there were retaliatory attacks on Sunni mosques in Baghdad as thousands of furious Shia Muslims took to the streets. In an apparent reprisal attack, gunmen in police uniforms seized a dozen Sunni men suspected of being insurgents from a prison in the mainly Shia city of Basra and killed 11 of them, police and British forces said.

Appeals for unity and calm were made by Grand Ayatollah Ali al-Sistani, Iraq’s senior Shia cleric, and the president, Jalal Talabani, who warned that Iraq was in "grave danger" and urged Iraqis to work together to prevent a civil war.

The calls were echoed in Washington and London. President George Bush pledged American financial help to reconstruct the mosque. "Violence will only contribute to what the terrorists sought to achieve by this act," he said. Tony Blair, who also promised help with the rebuilding, said the attackers’ aim was to foment violence between Shias and Sunnis, and urged both communities not to "fall into the trap".

Tariq al-Hashimi, a leading Sunni politician, said 29 Sunni mosques had been attacked nationwide, and at least one cleric killed. He urged religious leaders and politicians to calm the situation "before it spins out of control". Other leading Sunnis condemned the blast.

The attack on the mosque in the mainly Sunni town of Samarra, 60 miles north of Baghdad, occurred shortly after dawn, when up to 10 gunmen dressed as police commandos burst into the compound, tied up the guards and triggered a series of explosions that brought the golden dome crashing to the ground. All that remained was the wall of the mosque, flanked by two minarets.

US and Iraqi forces sealed off the mosque – which contains the tombs of two ninth century imams – and searched local houses. There was no claim of responsibility, but the five police officers responsible for protecting the mosque were taken into custody, and Iraqi authorities said another 10 men "with links to al-Qaida" had been arrested.

It was the third large-scale attack in as many days aimed at Iraqi Shias, who in the postwar chaos have been targeted by Sunni extremists with hundreds of car and suicide bombs. Though no one was reported killed, the impact was immediate and far reaching.

Protests in Samarra were repeated and magnified in the Shia heartlands of Baghdad and cities throughout the south. In the capital, residents woke up to shouts of Allah Akhbar (God is great) booming out from loudspeakers at Shia mosques.

"The Takfiris [Sunni extremists] have destroyed our holy shrine in Samarra," imams informed their neighbourhoods before reciting verses from the Qur’an. Shopkeepers shut their stores as thousands of mainly young Shias took to the streets, urging reprisal attacks against Sunni targets.

"I am going to go and burn the Abu Hanifa mosque [a revered Sunni place of worship in Baghdad]," said one youth who was carrying a picture of the militant cleric Moqtada al-Sadr. "It is time to take revenge for the martyrs."

Police said that at least 17 Sunni mosques in the capital had been fired on and one cleric killed by Shia militants wearing the black uniforms of Mr Sadr’s al-Mahdi army. A police spokesman said three other mosques had been set on fire, but could not provide details.

In Basra, Sadr militants surrounded and attacked the office of the mainstream Sunni Iraqi Islamic party. Smoke billowed from the building after an exchange of gunfire with the office’s guards and a strike on the building by a rocket-propelled grenade. The number of casualties was unknown.

There were other angry demonstrations in the southern cities of Kut, Amara, Nassiriya, and Diwaniya, where one Mahdi army militiaman was killed in clashes with Sunni residents.

Despite the violence and horrific attacks on the civilian population, it is difficult to imagine an act more designed to stoke civil war than the destruction of one of Shia Islam’s holiest shrines.

For the past 100 years the 72,000 golden tiles that form the mosque’s famous dome have shone out across the rooftops of Samarra, attracting pilgrims from afar to the shrines of Imam Ali al-Hadi and his son, Imam Hassan al-Askari. It is one of Shia Islam’s four major shrines in Iraq. Relics of the buried imams, including a helmet and shield, were reported damaged in the blasts.

Since the US invasion the city has fallen into the hands of insurgents and Islamic radicals, despite repeated claims by US forces to have removed them. Sunni militants have carried out lethal attacks on Shia pilgrims.

Such is the potential fallout from the explosion that the reclusive Ayatollah Sistani appeared on television. He said nothing, but later his office issued a statement legitimising protests "only if they are peaceful".

Another senior member of the Shia establishment, Grand Ayatollah Bashir al-Najafi, told the Guardian he was "distraught by the events", but criticised those charged with protecting the shrine: "The attack is the work of Takfiris who blemish Islam, and who strike at the heart of Islam. It is an attempt to start civil war in Iraq. We warned the government and the US about protecting holy shrines. They should do their legitimate and national duty. If they are unable to, the people will take their security into their own hands."

President Talabani, said the perpetrators were bent on "driving a wedge" between Iraq’s Sunni and Shia communities and wrecking talks to form a government of national unity. In a televised address, he urged all Iraqis to "stand together to avoid the most dangerous prospect we can think of".