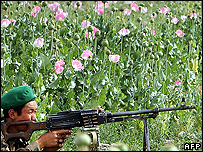 Drug control in Afghanistan has had some success

Opium production in Afghanistan could surge again this year and the demand for cocaine in Europe is higher than ever, a UN watchdog has concluded.

It says that efforts to stamp out opium growing in Afghanistan are being hampered by persistent lawlessness.

But the report said opium production went down last year for the first time since the Taleban were toppled in 2001.

The report says there are now "state efforts" in place to destroy poppy cultivation, in addition to incentives for farmers to grow alternative crops.

"Worldwide efforts to reduce the threat posed by illicit drugs have effectively reversed a quarter-century-long rise in drug abuse that, if left unchecked, could have become a global pandemic," the head of the UN Office on Drugs and Crime, Antonio Maria Costa, said in a statement released along with the report.

"Afghanistan's drug situation remains vulnerable to reversal because of mass poverty, lack of security and the fact that the authorities have inadequate control over its territory," Mr Costa said.

The BBC's Sarah Morris in Washington says that the UN report emphasised two weaknesses in efforts to control the spread of global drugs.

They are the demand for cocaine from Europe, and for cannabis worldwide.

The report said that too many professional, educated Europeans use cocaine and often deny their addiction.

And drug abuse by celebrities was often presented uncritically by the media which sent a confusing message for young people.

"A coherent, long-term strategy can reduce supply, demand and trafficking… if this does not happen, it will be because some nations fail to take the drug issue seriously and pursue inadequate policies," Mr Costa said.