This Top Ten list  was compiled with the inputs of Blacksmith's Technical Advisory Board (TAB) of experts with over 250 years of combined experience in this field and including specialists from Johns Hopkins, Hunter College, Harvard University, IIT India, University of Idaho, Mt Sinai Hospital, and leaders of major international environmental remediation companies. 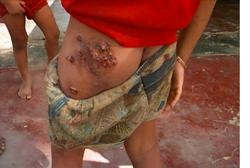 Ranipet, from India  ranked the 9th positiion in the list of most polluted places in the world. (2006)

Ranipet  is located about 100 miles upstream from Chennai, the fourth largest urban area in India. Although Ranipet is a medium sized town, its problems also pose a potential risk to the population of the nearby city of Vellore. A factory in Ranipet manufactures sodium chromate, chromium salts and basic chromium sulfate tanning powder used locally in the leather tanning process. The Tamil Nadu Pollution Control Board (TN PCB) estimates that about 1,500,000 tons of solid wastes accumulated over two decades of plant operation are stacked in an open yard (three to five meters high and on 2 hectares of land) on the facility premises and contaminating the groundwater

Vapi city, Gujarat : The town of Vapi marks the southern end of India's "Golden Corridor", a 400 km belt of industrial estates in the state of Gujarat. The Vapi industrial estate was established in 1967 and is made up of almost 2,500 companies mainly focused on chemical and chemical products production.

Kanpur city, Uttar Pradesh : It is located on the banks of Hindu holy river Ganges, with a population of around 2.4 million, is a major industrial hub in the Northern India.

Founded in 1999, Blacksmith Institute's vision is a clean planet for children around the world. In November of 2003, Blacksmith Institute launched the Polluted Places Initiative to address severely polluted sites throughout the world. By identifying polluted sites directly through an on-line nomination process, researching each site and publishing dossiers online, and conducting site assessments to consult with local stakeholders, Polluted Places seeks to streamline and target the way in which Blacksmith addresses pollution in the developing world.