Aldous Huxley rightly said that "after silence, that which comes nearest to expressing the inexpressible is music." The saying is apt for a musical group in India from the tribal community of Bastar in Chhattisgarh state.

The Bastar area is a district where more than 70 percent of the population is tribal. It constitutes 27 percent of the total tribal population of Chhattisgarh state. There are different tribal groups there and each tribal group has its own culture and their own traditional systems and festivals. 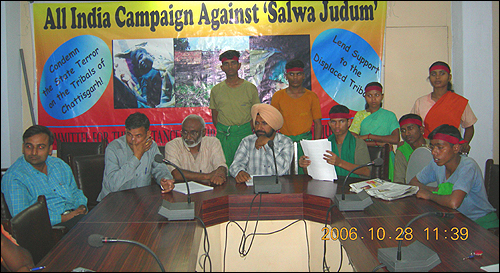 Most of the tribal groups still live in the interior forests. The area is also full of Maoists, who have had a presence in Chhattisgarh state for the last 25 years.

Maoists and other leftist extremists are widely known as Naxalites. The term originated from a movement started in a village, Naxalbari, in west Bengal in the late 1960s. The Naxalites are based in several states, like Bihar, Jharkhand, Orissa, Andhra Pradesh, Madhya Pradesh and Chhattisgarh.

As the presence of the Maoists (Naxalites) in Chhattisgarh state grew, in 2005, a counter-Naxalite operation came into being, called Salwa Judum. It was clearly the brainchild of Mahendra Karma, who is himself a tribal Indian and leader of the opposition in the state assembly.

In local terms, "Salwa Judum" means "purification hunt." The supporters of this campaign describe it as a "peace campaign." Naxalites, on the other hand, call it "group hunting," and they say it is a state-sponsored hunt of innocent tribal Indians who lend support to Maoists.

For the campaign, people who had been punished by Naxalites in people's courts — tribal Indians, chieftains, moneylenders — were appointed as SPOs (special police officers) with a salary of US$35 per month. Team-trained and provided with weapons, they are sent to hunt for the Maoists and their supporters.

The tribal Indians of Bastar, fed up with the atrocities of the state, have collectively launched a national campaign to protest against Salwa Judum and formed a committee to assist victims of Salwa Judum.

The chief minister of Chhattisgarh has signed a memorandum of understanding (MOU) with one of the country's biggest companies, TATA, for iron ore mining in Dantewada. An agreement with the U.S. power company, Texas Power Cooperation, has also been signed. In all, the Chhattisgarh government has signed MOUs worth over $13 billion with mining companies.

It is very difficult for the government to make way for the companies because the Bastar area of Chhattisgarh state is affected by Maoists and heavily populated by tribal Indians. Hence, the government has drawn up a plan to unleash a brutal reign of terror and force their evacuation from the area.

The revolutionary musical group has toured 12 states in the past two and a half months to create awareness about their miserable condition and to get support from the public. They hope the public will denounce the Salwa Judum and provide moral support, medicines, clothes, etc.

The troupe has visited Kerala, Karnataka, Andhra Pradesh, Orissa, Tamil Nadu, Maharashtra, west Bengal, Bihar, Uttar Pradesh, Uttranchal, Punjab, Haryana and New Delhi (the national capital). They are also planning to submit a memorandum regarding their demands to the president of India.

What is at stake is clearly displayed on the lips of Rajesh Kumar (a tribal Indian and the head of the musical group) when he sings the tribal song with his group. "The level of state brutality, whether by Naga forces, the CRPF or the Salwa Judum hoodlums is unbelievable. Heads are chopped off and planted on posts in the villages to terrorize the populace," claims Rajesh boldly.

In an interview I conducted, Sandhya, a tribal girl who was accompanying the group, expressed her feelings and said, "Women are gang raped and their stomachs ripped open and the fetus thrown out and crushed."

In their songs, the group allege that entire villages are being burned down, all the villagers' belongings looted and even their crops destroyed. The tribal Indians are being forced into roadside camps under the direct control of the Salwa Judum's SPOs. Over 50,000 tribal Indians have been forcibly placed into these camps.

According to the information gathered by tribal Indians, the camps are located next to SPO encampments, which have been set up every 5 kilometers as part of a carpet security system. They are guarded by SPOs who regularly beat, torture and kill people, and rape the women. The camps have no hygienic or medical facilities. If any tribal Indian is suspected of sympathizing with the Maoists, they are cruelly tortured and even killed.

There seem two reasons of the camps: firstly, to separate the tribal population from the Maoists and thereby make their attacks on them easier and, secondly, to forcibly clear the forests and hand it over to the multinationals.

A team of intellectual and activist citizens went to Chhattisgarh in May to investigate the situation, and included Ramachandra Guha (a historian and columnist from Bangalore), Harivansh (editor of Prabhat Khabar in Ranchi), Farah Naqvi (a writer and social activist from New Delhi), E. A. S. Sarma (a retired secretary to the government of India, from Visakhapatnam), Nandini Sundar (a professor of sociology at Delhi University) and B. G. Verghese (A former editor of Hindustan Times and Indian Express).

According to the findings of the team, the situation is extremely poor. The facts they provided were astonishing because they implicated the state in the atrocities being committed against the tribal community in the name of so-called "peace hunt."

Their report revealed the truth about the Salwa Judum, which the state claims is a campaign by tribal Indians against the Maoists. In reality, it is state-sponsored terrorism against tribal Indians.

Under the Salwa Judum, tribal Indians are forcibly displaced. The report estimated at the time that more than 15,000 people from 420 villages had been displaced and rendered homeless, and were residing in the refugee camps under the watch of the SPO.

The report observed that when villagers are told to meet with the Salwa Judum, those who refuse to participate bear the brunt of the atrocities committed by its forces.

The committee for the assistance of tribal Indians, with the help of the revolutionary musical group, has urged all Indians to support their cause:

1. To stop the Salwa Judum with immediate effect.
2. To cancel the recruitment of SPOs and disarm them.
3. To take back the paramilitary forces
and Naga battalion from Bastar.
4. To send back the people to their villages from rehabilitation camps.
5. To make a judicial enquiry and investigation on the brutality of the state.
6. To give work to tribal Indians and to give water to every field.

In conclusion, it can be said that the state government's "peace hunt" is in reality state-sponsored terrorism.

In the name of development, many tribal Indians are being forcibly displaced and rendered homeless. They are an obstacle to the state's plans for bringing in the multinationals. The Maoists, who have had a presence in the state for 25 years, are also an obstacle. It is not easy to separate the Maoists from the tribal Indians. Salwa Judum seeks to root out both.