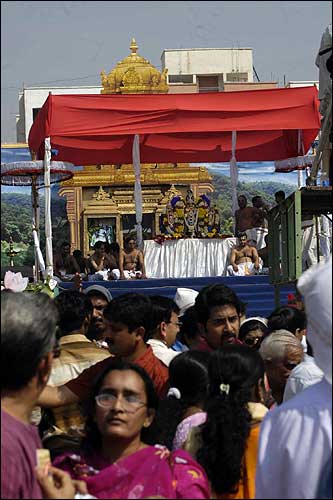 "Marriages are made in heaven" goes the saying, and indeed, the people of Mumbai were witness to one such divine marriage: that of Lord Venkateshwara to Goddesses Padmavati at the Mumbai Metropolitan Region Development Authority (MMRDA) ground in Bandra, a western suburb of Mumbai, on Sunday.

The Lord Venkateshwara is the resident deity of the country's most revered and famous temple, Tirupati, which is located in Andhra Pradesh in South India.

The Utsav Murti (the statues of Venkateshwara and Padmavati) traveled all the way from Andhra Pradesh to bless the people of Mumbai.

The marriage ceremony was a grand spectacle befitting the almighty lord. The elaborate wedding rituals lasted for two hours amid the chanting of hymns. About 150 priests presided over the ceremony.

The band played the traditional south Indian wedding music. The statues of the almighty were decked in marigolds and other flowers worth 50,000 rupees and brought in from Chennai.

It is estimated about six lakhs (600,000) devotees witnessed the Srinivasa Kalyanam (marriage), which took place over two days. About five lakhs (500,000) laddoo prasadam (blessings of the Lord in the form of sweets), which was shaped into small round balls made of jaggery, gram flour and dry fruits, were distributed among the devotees.

The Kanchi Shankaracharya Jayendra Saraswathi and Aandavan Swami, head of the Srirangam Math in Tamil Nadu, were present during the marriage ceremony.

This was the first time the marriage of the god took place in Mumbai. It will remain an unforgettable event firmly etched in the minds of the devotees.