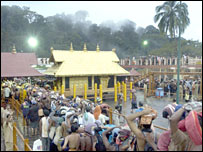 Nearly 200 staff at a Hindu temple in southern India have won the right to wear underwear to work. The human rights commission in Kerala state has ordered Sabarimala temple to withdraw a dress code that barred staff from wearing underwear.

The dress code was imposed 10 years ago after several cases of theft. Sabarimala is the second busiest temple in southern India after Tirupati, visited by nearly 50 million people during the special pilgrimage season.

It also receives a huge amount of donations in the form of cash and gold, silver and diamond jewellery.

The state human rights decision followed after an anonymous complaint about the issue.

The staff working in the strong room of the temple, where the cash and jewellery are kept, are not allowed to wear anything except a sarong-like lower garment called “mundu”.

The commission has now asked the government to take necessary steps to ensure that the staff are allowed to wear their underwear and modern facilities are put in place to prevent thefts.

The staff say manual handling of such an enormous amount of cash and jewellery is not possible.

There are about 60 staff on duty in the strong room at a time.

Observers say the temple needs modern facilities such as x-ray machines to screen people for security as well as better sanitation facilities.

Sabarimala is one of the most popular pilgrimage destinations in Kerala, located in the Sahyadri Mountains (Western Ghats).

Pilgrims have to trek for about three hours to reach the main temple from the base camp at Pampa near the river. There are few toilets, no waste management or treatment facilities.

The state’s Water Resources minister NK Premachandran recently expressed concern over the level of pollution in the Pampa river saying it posed a great threat to public health.

The government is planning to set up a trust to manage the affairs of the temple.