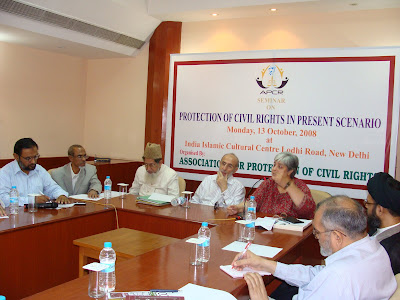 With rise in terror attacks in India in the last couple of years for which Muslims were blamed – in a few cases maybe rightly but generally without going into probe and proof – the already backward and deprived community have faced a new serious problem: picking of their youths from here and there, gross violation of their civil and human rights and boycott of lawyers to take up cases of terror suspects. The fast depressing situation demanded formation of a group with a nationwide structure and a network of legal activists and paralegal social workers from village to the national capital.

Hence was formed Association for Protection of Civil Rights (APCR) in 2006 in Delhi with prominent legalist and Bombay High Court’s senior lawyer Yosuf Hatim Muchala as its chief supported by a governing body of eminent lawyers from across the country.

Besides helping families suffering from police atrocities, another purpose of the group is to ensure that schemes meant for minorities properly reach the deserved, and for this, paralegal social workers among the suffering communities are being trained.

“Deprived of social and economic justice for long several communities have taken to arms, we wanted the Muslim community and other marginalized sections do not go that way. Rather they keep faith in the judiciary, they know about their legal rights, civil rights and fundamental rights, so that they could pursue their cases in courts. We want to prepare a group of paralegal workers from within the community that know how to use means and tools of democratic system,” says Dr Shakeel Ahmad, founder member of APCR.

In Gujarat, we had formed Cell for Legal Help & Guidance under Islami Relief Committee of Gujarat in 2001. We first helped earthquake victims get their relief and compensation. After 2002 Gujarat pogrom, we worked for riot victims. Godhra Muslims were accused of conspiracy for train fire and POTA was used against more than 100 people. We fought their case, made a presentation before POTA review committee and as result first Supreme Court rejected POTA law for train fire accused and two days back the Gujarat High Court also took the same way. We worked to utilize the free legal aid system of the country. Satisfied with our work in Gujarat and given the demanding situation in other parts of the country we decided to form an all India body and result is APCR, says Dr Shakeel Ahmad.

The group played a key role in opening the riots cases in Gujarat. The state police had closed 50% cases of the pogrom 2002. They took up the issue, brought it up to the Supreme Court and 2170 cases were reopened.

Since its formation in 2006 APCR has visited about 10 states in the first phase. Accompanied with APCR coordinator Md Mahtab Alam, Dr Shakeel has held orientation programs in these states to set up state level units. “We have formed ad hoc setup in some states besides local study centres for workers. Workshops for them have been held. About 600 people have got attached to APCR. We have provided them a syllabus of 11 books on civil rights, constitution and legal procedure. We want to train 100-200 paralegal social workers in each state,” says Dr Shakeel.

“The group wants to raise paralegal social workers from within the suffering community so that beyond celebration of victimhood these people become aware of their rights and measures to protect their rights and help their fellow community members in this regard. These workers should be able to note any right violation, intervene and legally pursue the case and be ready for long legal fight,” says APCR coordinator Md Mahtab Alam.

The group is holding camps and workshops and educating the activists about constitutional and democratic means to safeguard their rights. They are being trained how to file FIR, PIL and habeas corpus. They are told how to report to NHRC and National Commission of Minorities and how to counter media propaganda.

The group has also taken up some actual cases. “We played a big role in keeping the Batla House case alive, we coordinated families and lawyers of the terror suspects and we also helped families in taking services of lawyers. We are monitoring all cases related to the encounter. Besides we are also coordinating some cases in Madhya Pradesh and Karnataka,” says Mahtab.

“People’s response is immense as the members of the minority community are suffering at large scale. Such programs are building up confidence in people, they now understand that they have rights in the country and they have right to achieve them. We had a target of 50 people in our orientation program in Maharashtra but 180 people participated in it,” says Mahtab who can rightly be described as a man on wheel.

The response was good not only because the growing hostility against the community in the country in the backdrop of terror attacks but also because they feel that schemes and projects meant for minorities are reaching them because of corrupt system. “We came to know from participants that most of educationally and economically backward pockets of the society are facing civil rights violations at large scale. They are being exploited and schemes for their welfare just dissolve in thin air,” says Dr Shakeel adding that this is the other area where APCR is working.

APCR is preparing literature on civil rights, fundamental rights, constitution and legal procedure in all regional languages. They also want to prepare training manual in all languages.

They want to prepare a syllabus on civil rights for educational institutions both modern and madras. They are going to hold training camps at madrasas for madrasa students and teachers. The will hold their first program at Jamiatul Falah in Azamgarh this week. “We will contact all big Arabic madrasas and train their students so that they become aware of their rights and social issues,” says Dr Shakeel Ahmad.

Besides offices at the centre and in state capitals they want to build units at lower court levels also where legal aid is needed. APCR wants to change the free legal aid system into a movement.

The NCHRO filed a complaint…

How law suits can help…

Extra-Judicial Killings versus Rule of…