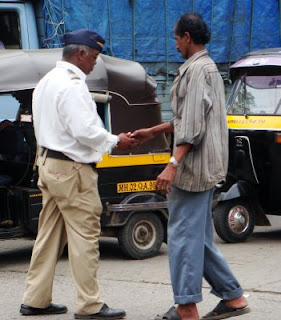 MUMBAI – India’s planned US$70 billion road infrastructure investment over the next three years, and the country’s growing heavyweight global status, are being undermined from within – by highway check-point policemen looting bribes from truckers worth a remarkable US$4.5 billion annually.

None of the world’s other trillion-dollar economies (the United States, Britain, China, Japan, Germany, Russia, Brazil, France, Italy, Spain and Canada) faces this magnitude of police corruption. Prime Minister Manmohan Singh’s government appears to be oblivious to a problem that is a national embarrassment, besides damaging the economy. India’s efforts to secure a permanent seat in the United Nations Security Council appears somewhat

outlandish when traffic cops are busy countrywide as thriving highway robbers. Police corruption benefits from the scale of India’s road transport, which hauls three-quarters of national freight. The industry contributes 4.7% of India’s gross domestic product (GDP), as haulage vehicles criss-cross the world’s third-largest network of roads – 3.3 million kilometers in all.

Multiply the estimated four million trucks operating in India’s highways by the estimated $10 per truck daily bribe, and we get the astounding $40 million daily bribe figure. The Berlin-based Transparency International mildly terms the corruption in India’s road transport system as “highly institutionalized”.

Just as remarkable as the annual turnover of police-run highway robbery through hafta, or extorted bribery, is the indifference shown by political leaders and the public at large.

On August 1, the Kolkata-based Statesman, one of India’s oldest and most independent English dailies, carried a front-page lead story stating that a 24-hour haulage strike then underway would cost the Kolkata traffic police 4 million rupees (US$82,133) in daily bribes, which works out at $30 million annually.

The fact that India’s cops routinely collect bribes from truckers is no secret, but the Statesman report revealed some startling numbers. Members of the Federation of West Bengal Truck Operators Association told Statesman reporter Aparajit Chakraborty that each truck driver paid a minimum of 300 rupees, or US$6, in bribes daily. That is if all his various papers are in order. If not, the bribe amount rises to 1,000 rupees or even 3,000 rupees.

So annually, the Kolkata traffic police, road transport officials and everyone upwards, including presumably politicians in this pyramid of corruption, illegally earns a conservative $30 million annually – and this is just one metropolis.

Take into account other major Indian cities such as Mumbai, Delhi, Chennai, Bangalore and Hyderabad, as well as about 5,500 smaller cities and towns, and the Transparency International annual figure of $4.5 billion that India’s cops loot from truckers appears considerably understated.

After the Statesman front-page lead story on August 1, Manmohan or Home Minister Palaniappan Chidambaram ought to have been sufficiently embarrassed to announce steps to stop policemen officiating as highway robbers. They didn’t. Neither did Buddhadeb Bhattacharya, the chief minister of the local communist party-led government of West Bengal – Kolkata is the state capital.

Nor was there much pressure on politicians to respond. Instead, the national media worked itself into a lather over more earth-shaking events in August, such as an immigration official at Newark airport in New Jersey daring to question at length a Bollywood star arriving in the US.

While India’s policemen and government officials are directly looting the trucking industry, the lifeline to any economy, the consumer of course indirectly pays for the bribe through the higher cost of products. The problem concerns everyone.

The economy would directly gain through improved trucking efficiency if fewer policemen played at being both cops and robbers. “The number of trips performed by a truck could increase by 40%, if forced delays [by crooked cops] are avoided,” said Transparency International in a 2007 report “Rampant Corruption in Trucking Operations”. Such delays, it said, cost the national economy about $233 million per year – mere peanuts to what the roadside police robbers earn.

A truck industry operator highlighted a more lethal angle to the Transparency International study. “Harassment at the hands of police and Road Transport Office staff results in rash and negligent driving to make up the time lost,” he said. “The indifferent attitude of the Transport Department is the main reason for approaching middlemen or touts.”

The problem looms worse at a more local level. While long queues of sometimes hundreds of trucks waiting at police checkpoints are a familiar sight on the highways, short-haul truckers suffer from police robbery while distributing consumer goods to wholesalers within city limits.

A proprietor of a mid-sized trucking company in southern Chennai told me how drivers of his lorry fleet asked for a stash of five-rupee notes – the lowest-domination Indian note – before they set off on a delivery trip in the city. “Policemen put their hand into the driver’s cabin and quickly grab whatever currency note the driver holds out, so my drivers thought of being ready with just a five-rupee note,” he said.

India’s bandit-cops, though, are getting greedier and bolder. They have started actually issuing their own “currency”. In West Bengal, crooks in uniform make available notes with a picture of a rose that trucker drivers can “buy” for 100 rupees at any of the thousands of dhabas – rugged highway eateries. The Statesman report says that truck drivers showing this “currency” at a police checkpoint are allowed to pass.

Rules and regulations are also engineered to feed this brazen looting. Official reasons for extorting bribes include real or imaginary traffic violations, overloaded trucks, parking at no-parking zones and entering a “no-entry” zone.

According to Transparency India, truckers pay bribes at every phase of their business, starting from getting their vehicles registered with the Road Transport Office and obtaining road-worthiness certificates and paperwork to obtain and renew interstate and national permits. All that before handing over cash at police checkpoints set up for various reasons, such as to curb smuggling or as an anti-terrorism measure.

Other ready-made excuses for harassment include paying tolls, taxes for bringing goods into an area and sales tax.

“Due to the largely unorganized nature of the trucking operations [86% consist of small entrepreneurs], assessment of the extent of corruption is a difficult one,” says the TI report.

The event started off a bidding process for building 139 new road projects to cover 14,395 kilometers at a cost of $20.68 billion. Minister Kamal Nath said that the next two years would see India building more highways than any other country.

India expects $70 billion to be invested in the road sector by 2012, with private funds contributing $41.05 billion and foreign investors $10 billion.

Manmohan is personally reviewing progress in the sector, but if he and his government could prevent even a small part of the ill-gotten gains now vanishing into the pockets of the cops and their senior police officers and politician masters, India would have to depend far less on external sources for inf
rastructure upgrades.

As a remedy, Transparency International suggests several steps to curb police-led roadside robbery:
# Single inspection squads at inter-state check posts to give “no-objection certificates” on behalf of all departments.
# E-truck transport – computerizing transport offices and inter-linking them across the country.
# Online registration of vehicles and permit facilities.
# Outsourcing of services for registration and fitness certificates.
# Drop boxes for paying road, sales and other taxes and fees.
# Independent and decentralized vigilance.
# Uniformity in rules across the country.

Police looting on roads is part of a larger problem of organized police corruption, an administrative rot that mocks India’s trillion-dollar economic status and aspirations to global leadership.

One of the many idiosyncratic aspects of India is that we often learn to live around a problem rather than solving it. “Adjust” is a famous adaptability word in daily use, and the ability to cheerfully “adjust” to circumstances is one of India’s greatest strengths as well as weaknesses.

How quickly and effectively Manmohan’s government can stop policemen from robbing the nation’s road users depends on how much of this multi-billion dollar loot reaches politicians high up in national and state governments.

INDIA: A responsible government will…