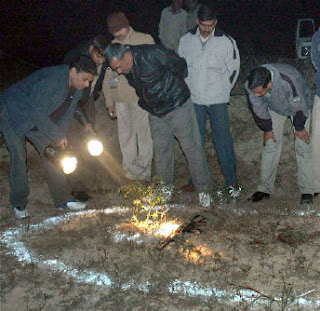 There are reasons to believe that the killing of two alleged Pakistani terrorists by NOIDA police and UP ATS in the early hours (2:15 am) of Republic Day, 26th January, 2009, was a fake encounter and that these two killed are probably the same Kashmiri youth who are mentioned in the account ‘A Conscience Encountered’ reproduced below which had exposed a planned encounter in October, 2008, in Lucknow. It is possible that these two youth had become a liability for the police and therefore were eliminated. Reasons that this encounter appears to be fake are:

(1) The Pakistani identity is not conclusively established. The names given out by police and ATS are Abu Ismail and Farooq. One passport recovered from them is in the name of Ali Ahmad. Farooq has made a dying declaration that he and Ismail are Pakistani nationals. The police are yet to name a terror outfit to which the two belonged. The DIG Meerut claimed that the terrorists also had two identity cards in the name of students of two Indian institutions. (Two Kashmiri youth who were to be encountered in October were kept in Meerut – see the following account).

(2) Two AK-47 were recovered from the terrorists which were not used in self defence even when police used fire. (These guns are probably the same as ones bought for the planned October encounter in Lucknow – see the following account).

(3) There are conflicting claims about chase before the terrorists were shot dead. ATS claims that terrorists were chased from the Amity University check post, 6 km from Sector 97 in NOIDA whereas the NOIDA police claims that they were chased for 25 kms from Lal Kuan in Ghaziabad that would have crossed at least 5 police posts on the way. None of the police posts intervened.

(4) Sector 97 in NOIDA has also been the site of two other recent encounters.

(5) The terrorists had stopped at a NOIDA tea stall to ask for directions from a man, who coincidentally was a police informer.

(6) The Gypsy used by police in the encounter had a few number plates lying inside which were seen immediately after the encounter. The Gypsy has since gone missing.

(7) There is one bullet hole on the windshield of the Gypsy which could not have been caused by the AK-47s, the only firearm recovered from the terrorists, whereas there are no bullet marks on the Maruti 800 used by the terrorists.

(8) The credibility of the operation was questioned immediately on following two days by two national dailies.

I’ve often been blamed by friends and colleagues for not keeping secrets to myself. It has been my practice to share information with people whenever I feel my conscience burdened. From my experience I can say that whenever I’ve, under such circumstances, shared the truth, it may have put some people in inconvenient positions but in the long run it proved to be right thing to do. But, I must confess, I’ve never encountered something as big as this. Till now it has been only very personal things or at the most matters dealing with my friends or colleagues. But the information I possess now is of societal and national significance. I’m revealing it because it can save two lives. I’m quite aware, that in the process, I’m raising a finger at the departments concerned with internal and external security of the country and can possibly attract some punitive action too. But when I weighed the pros and cons of this I was convinced that if by revealing this information lives of two youth can be saved then I must do it. I must take the risk.

The UP Police in a planned joint operation with the army is likely to kill two Kashmiri youth (obviously Muslim), already picked up and in their custody somewhere in Meerut , in an ‘encounter’ with these ‘dreaded terrorists.’ The drama would be enacted in the Lucknow cantonment area, the most plausible location for an anti-national to be encountered in. Two AK-47 guns, already bought from Nepal and brought through the Bahraich route, would be shown to have been recovered from these ‘terrorists.’ Very high level police officials and Colonels of the Army are involved in planning this Jamia Nagar encounter equivalent of UP level operation. An encounter specialist, posted at the Cantonment Police Station till recently, has been chosen to implement the design. Recently, UP police has been presented in poor light because of contradictory (and competitive) claims made by Delhi and Mumbai police for having arrested terrorists which they claim were responsible for bomb blast incidents in UP. The question raised then is who are the people the UP police has arrested earlier who are being claimed to be responsible for these same incidents. UP police doesn’t want to remain behind in the game of bravery now being played by police elsewhere. They are anxious to demonstrate that they too can carry out high profile encounter operations like the one at Jamia Nagar in Delhi . It is a different matter that civil society groups and some media have questioned the bona fides of the Jamia Nagar operation itself and the credibility of the government is at stake.

The objective of the above operation is to bring laurels to UP police. The operation would be justified in the name of national interest. UP is under pressure because it has been projected as the breeding ground for terrorist. The UP police wants to show that it is doing its part in countering terrorism.

If this is true then nothing can be more shameful. Most of the newspaper reading citizens would go along with the police version and not question it in the national interest if such an operation takes place. However, I’ve decided that my commitment to my nation is in ensuring justice to its citizens or at least questioning what is not just. Killing of innocent citizens in such operations or incidents like hunger deaths and farmer suicides are all government’s responsibility and no such incident can be pardoned.

However, if what I’ve written above is totally based on imagination run wild and doesn’t have an iota of truth in it then I’ll be most relieved person, because I shudder to think that responsible government institutions could be engaged in such gross things. I obviously apologize to the police and army for having questioned their integrity. But the fact of the matter is that police has lost so much credibility in this country that I thought it fit to bring out the matter in open for the sake of two Kashmiri youth. We hope that not only they will not be ‘encountered’ but no innocent will be subjected to such a fate, ever.

[Dr Sandeep Pandey is a Ramon Magsaysay Awardee (2002) for emergent leadership, member of National Presidium, People’s Politics Front (PPF), heads the National Alliance of People’s Movements (NAPM) and did his PhD from University of California, Berkeley, USA. He taught at Indian Institute of Technology (IIT) Kanpur before devoting his life to strengthening people’s movements in early 1990s. He can be contacted at: [email protected] Website:
www.citizen-news.org]