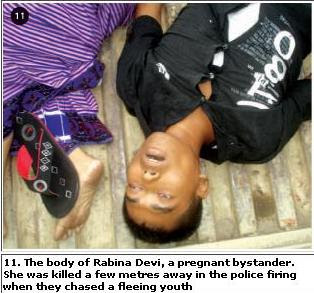 Manipur, a State which sees much more daily violence than Kashmir, hardly figures in the mainstream media. Once in four or five years a stunning incident hits home and brings Manipur back into national focus. Manipur is in the news. That is a miracle in itself. A State accustomed to steady national amnesia is watching bemused as the media descends. CNN IBN is here, New York Times is here, says a local editor. NDTV and Times Now have come and gone, says a local reporter.

Manipur is in the news and its killing fields are feeling the impact. A State that reported 225 encounter killings this year until Tehelka hit the stands on July 31 has seen hardly any killings by the State in the three weeks since. The magazine ran an unnamed photographer’s sequence of 12 shots which chronicle the straight killing of a former insurgent by police commandos. No encounter, just a plain, point blank killing in a marketplace. Given Manipur’s status on India’s news radar it did not become a cover story even then, not until a subsequent issue. But it suddenly brought home to the country and the world the chilling realities in the border State that gets the least media attention.

A Congress government runs this State and no eyebrows are raised at the Centre when the Chief Minister said in the Assembly on the day of this killing, “I don’t want to kill but what is the option.” (A translation of his statement made in Meitei.) A statement he has subsequently denied, though it was made in the House. But the photographs punctured the inertia. The Home Secretary at the Centre has come visiting since, even though Mr. Chidambaram, who hot-footed it to Kashmir when the Shopian rapes engulfed the Chief Minister there, has not.

The photos got national exposure because the photographer who shot them could not get them published in the Imphal newspaper he worked for. They were sent to Assam and given to Teresa Rehman, Tehelka’s correspondent in Guwahati. Once in four or five years a stunning incident hits home and brings Manipur back into national focus. The last time was in 2004 when a young woman called Manorama was killed and raped after the Assam Rifles picked her up, and anguished mothers in the State chose to demonstrate naked. Those pictures seared the national consciousness.

Off the media map

Manipur has the killings, Kashmir gets the coverage. For reasons difficult to fathom, it fell off the media map. Despite a level of daily violence which Kashmir has not now seen for some years, Manipur does not make news. So there is no national outrage.

Over a 60-day period earlier this year (May 15 to July 15) the media in the State reported 102 civilian casualties including deaths, 72 deaths of militants including 37 “encounters”, and five of men belonging to the State forces. Over the same period, this is what got picked up by the media outside the State: The Telegraph, the paper which has a Northeast edition coming out of Guwahati, found space in its Kolkata edition for six stories. Of the four on Manipur, three related to the killing of four Bengali migrants, the fourth from New Delhi was about a Manipuri actress nabbed with a militant. In the same paper, Kashmir rated nine stories and two editorials.

DNA in Mumbai found space for 25 stories from Kashmir, three from Assam, none from Manipur. The Delhi edition of Times of India which also has an edition in Guwahati, found space for two stories from New Delhi on Manipur, one of which was on the nabbed militant above. What of the 70-plus conflict-related deaths in two months? They did not make news. And Kashmir? It rated 48 stories, half of them on the rape-murders in Shopian.

The Delhi editions of The Indian Express and The Hindu over this period had around 60 stories each from Kashmir, eight and 11 respectively from Imphal, and each of them reported three militant-related deaths in this benighted State. Kashmir inevitably merited an editorial or two over this period, none of the seven States which make up the Northeast, did.

What was the level of violence in Kashmir over the same period? Civilians killed 18, including the rape and murder victims in Shopian, militants killed seven, troopers, four.

And what of television? “If a story breaks here NDTV will have a one-minute story,” says Imphal-based journalist Ahanthem Chitra. “If something happens in Kashmir there are panel discussions. Manipur, Nagaland, no panel discussions. It is headline news for one day then it dies out.”

What makes a newspaper national, asks Pradip Phanjoubam, the editor of the Imphal Free Press. “Should not coverage be a criteria if papers are classified national by DAVP (Directorate of Advertising and Visual Publicity) and RNI (Registrar of Newspapers for India)? Should they not have to give space to all parts of the country?”

What is the shape of the local media in a poor cousin State riddled with insurgency? One of stoicism coupled with genteel penury. Salaries for experienced journalists seldom cross Rs. 5,000 a month, editors’ salaries range between 10,000 and 30,000 a month, mostly at the lower end. Appointment letters are a rarity though the All Manipur Working Journalists Union has now begun to insist on them. How do they manage? They work at more than one job and live with their families.

The local economy generates no advertising for a newspaper; corporate advertisers prefer to use outdoor media. There are other challenges. Newsprint has to be transported via Assam by train, then by road. You have to pay tax to the NSCN-IM, Rs. 7,000 per truck. It costs Rs. 10,000 per tonne more, by the time it arrives.
Increased aggression

The killings continue with impunity because the State feels no pressure at all from a brave and persistent local media. As it keeps up coverage of the protests following the Tehelka expose, State aggression has stepped up, says the editor of Ireibak, Irengbam Arun. Last week, police commandos lobbed a smoke bomb towards the journalists covering a sit-in-protest in Imphal East. Elsewhere, commandos stopped a vehicle carrying journalists who were coming back after covering protests and questioned them at gunpoint. He adds that some months ago, in an incident possibly unprecedented elsewhere in the country, the Director General of Police summoned editors and asked them to reveal which reporters had done a story on urea smuggling which showed complicity of the police.

Keeping journalism going in Manipur then, is a daily challenge