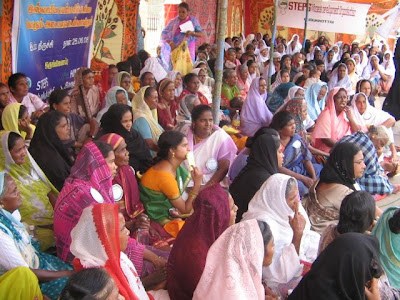 Can there be a separate Mosque for Muslim women? Can a pent-up woman think that the women’s rights as per the Holy Quran should only remain as pieces for admiration and not for practice? The man pronounces triple “talaq” for petty reasons and feels his hands are washed off from the responsibilities of his wife, children and, seeks a second partner out of whims. The first wife is crushed as unimportant stone, trampled and left to lurch in her life. Hitherto “not acceptable divorces” through a letter, SMS, long distance telephone calls, without any arbitration are approved by some of the quacks for paltry bribe. A stupid father-in-law at Vanniyambadi in Vellore District sent a lawyer notice to his non obliging son-in-law to be a Ghar Daamad (slave son-in-law) and foolishly terminated the marriage though there existed no qualms and quandary between the couple.

Dawood Sharifa Khanum, of Pudukkottai village around 400 kms from Chennai, is a stalwart and an activist working for the empowerment of women and women’s self confidence. Hailing from modest family, she came to Alighar Muslim University to study secretarial course; she returned back home without completing the course since she was appalled when she heard the narration of a number of Muslim women who were rendered hapless because of unscrupulous and unmindful Talaqs (divorces) and dowry persecutions, and feminists abused and refused – all this made up her mind to devote for the cause of women rather to study further. She could see the total ignorance of Holy Quran and Islamic fundamental practices among women in and around the area.

The ignition in Khanum’s heart was so strong that she decided to fight for the rights of the Muslim women in particular and non-Muslims in general. Her perseverance was so strong that she attended a women’s conference in Patna, and she could understand that women are powerful and can stand quite equal to men to fight atrocities and agonies from female bashing by male dominants. After gaining thorough knowledge about forming organization and meeting several eminent scholars, and attaining good understanding of Holy Quran and Ahadees, Sharifa Khanum formed a forum known as STEPS to address women’s issues.

She says that, after the political riots occurring every now and then, women are worst hit. She interviewed 1000 Muslim women to assess their knowledge of Holy Quran. The result was very bleak. In 2001 she organized a team called SAYA and there was a large gathering of Muslim women. They all were only to say that they suffered “Male Domination”, “Triple Talaq” (divorce) inordinately used and Mehar (dowers money) refused. She remembers Aayisha (Raz) as perfect law abider and the present male scholars only admire such laws and fail to implement them when it is necessary.

STEPS, the group she organized decades ago, is a sole help mate to the destitute women. Small loans are provided to the efficient women who could earn profit with the loan being the capital amount. Scholarships to the students are arranged. In nutshell all encouragement to women’s education is carried out in letter and spirit.

She says, “Number of women throng to us. We meet every month. The women who come to us irrespective of status say in a stereotyped story in unison; “men take the Holy Quran’s interpretations to their advantage. She asks,” Men insist us on our veil and scarf; are they conscientious on their follies, and do they remain infallible?”

She retorts, “The so-called Jamaats that were attached to mosques and which discuss community affairs are not really of the people for they are not elected. They are not even run by wise people, but actually male species that discriminate against women.”

Among multifaceted activities within the framework of Indian constitution, Jamaat teaches how to be decent and law abiding citizen of India. It regularly campaigns on the Sharia, Muslim Personal Law in India and also publishes a Tamil monthly magazine, “Women’s Jamaat”

Sharifa does not fail to say: “Threat calls are regular but they are not going to deter our passage to success”. “We are verbally abused; our morality is called into question”

Sharifa also explains the perplexity of four Madhabs – main schools of legal thoughts, Hanafi, Maliki, Shafee and Hanbali. She says, “Each of these schools has engendered their own methods of interpretation and offer different readings of the same Quranic percept or Sura” She observes that if a man deserts his wife, one school of thought opines to wait for 9 years and other school of thought prescribes 3 years. She further maintains that Sharia must be learned thoroughly well without any flaws.” In countries like Bangladesh and Pakistan the Sahria are interpreted by the courts and in many cases the learned judges have approached the law in a sprit of justice and humility and with due respect to women.

She has exhaustive explanation about Sharia, Muslim Personal Law, Dissolution of Muslim Marriage Act1939 and Muslims Women’s Protection of Rights of Divorce Act 1986. She is so conversant with women’s and other social laws, it is not only interesting but also mind boggling.

Why a separate Mosque for women?

“The “male jamaats” are unlawful kangaroo courts that play with the lives of women. A mosque-jamaat axis is a power centre that controls the community. When women are refused representation there, we have no choice but to have our own jamaat. And since a jamaat is attached to a mosque, we have to build our own mosque.” Says Sharifa.

The congregational prayer, exclusive by way of a separate mosque is not a feminists’ innovation but equality ordained to women with respect to “salat” by Almighty Allah.

The Holy Quran emphasizes equality among genders addressing as “believing men and women” with regards to duties, rights, virtues and merits (Chap: 33:35). If men have mosques, why not women?

Insha Allah on completion, this will be the world’s first women’s mosque.

Nearly 100 divorce victims have become independent entrepreneurs earning from Rs.5000 to Rs.10, 000 monthly; this figure they have never dreamt in their wedlock. Sharifa helped them financially. They sustain life free from hassle, free from male domination with abuses, starvation and life with full of anxiety.
There are about 25000 members in the “Jamaat” and she runs a Quarterly magazine “Women’s Jamaat” in vernacular Tamil language which are circulated among members free of cost.

She further says while speaking to this writer in chaste Tamil, with a big confident laughter as “atta” meaning “daddy”, we are planning an exclusive Bank for us. Insha Allah.

She appeals all the noble hearts and philanthropists to generously donate for the mosque and other constructive programmes. She can be directly contacted: [email protected]

We need a public, consumable,…

The myth of Bigamy in…

Iranian Woman who became the…

The women in India

Subjugation of women rights in…