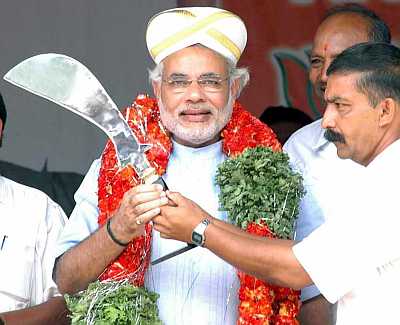 NEW YORK: Indian Muslim Council – USA,  an advocacy group working towards safeguarding India’s pluralist and tolerant ethos, called the decision of fDi magazine not to honor Narendra Modi the Asian Personality of 2009 award as a step in the right direction. IMC-USA further urged fDi Magazine to cancel the amended award to the State of Gujarat in lieu of Narendra Modi.

Following widespread protests from rights activists, the fDi Magazine amended the award to be given to Modi with the statement” Following a review prompted by the ongoing investigation into the 2002 Gujarat riots, fDi has decided to present its award to Gujarat state, rather than  Narendra Modi, the state’s chief minister”. The statement further said ” Modi was chief minister of Gujarat at the time of the riots. Modi’s alleged role in connection to the riots is under investigation in which over 2,000 innocent people were killed”.

This open state sponsored massacre of minority Muslims occurred in 2002 under Modi’s tenure as Chief Minister. In addition, hundreds of women were gang raped on the streets of Gujarat, over 150,000 people were ethnically cleansed and an estimated damage of $500 million was caused to minority owned properties. Narendra Modi is widely regarded as the architect of these massacres, considered to be the most brutal in the history of India since its Independence. After almost 7 years of evasion from any judicial purview on April 24th 2009 the Indian Supreme Court finally asked a Special Investigation Team (SIT) to probe the role of 64 people, including that of Gujarat Chief Minister Narendra Modi in the Gujarat 2002 riots cases.

“It was on Modi’s watch that the massacres took place and he continues to be the Chief Minister of Gujarat. Giving the award to the State of Gujarat instead of Modi is akin to awarding Nazi establishment instead of Hitler” said Mr. Rasheed Ahmed, IMC-USA’s President. “Tens of thousands of ethnically cleansed victims of the 2002 violence still live in refugee camps. The State of Gujarat under Modi continues to actively create hurdles into the prosecution of those involved in the violence” he further added.

In 2005, the US State Department banned him from entering the United States following his involvement in these massacres.A recent report published in the beginning of 2009 by the United Nations Human Rights Council has warned of a “very real risk” of a repeat of the 2002 Gujarat riots in the country unless politicians stop exploiting communal distinctions that presents a dim picture of religious intolerance in India. The report compiled by U.N. Special Rapporteur on Freedom of Religion or Belief Asma Jahangir states that members of the Muslim community shared their concerns about the ongoing repercussions of communal violence, after the Gujarat massacre in 2002.

Indian Muslim Council-USA is the largest advocacy organization of Indian Muslims in the United States with 10 chapters across the nation.