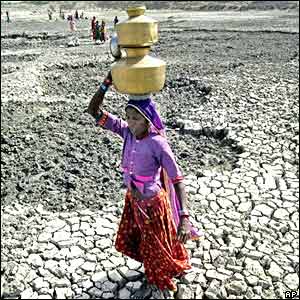 Faced with starvation and complete financial ruin, farmers in the drought-ridden region of Bundelkhand are being forced to sell what is often times their only remaining “possession”: their wives.  The area of central India straddling the states of Uttar Pradesh and Madhya Pradesh suffered from one of the worst droughts in recent memory this summer. Planted seeds died while waiting for the life-giving rain that arrived weeks too late. Even worse than the failed crops was the death of cattle from lack of drinking water. In India, cattle provide milk, plow fields, and can even be rented out. Without cattle, families lose a fundamental asset.

So farmers, without any source of income, sought loans from private money lenders to provide the most basic needs for their families.
In the past several years, as indebted farmers’ suicides gained international attention, the Indian government made it easier for farmers to receive loans from banks. But in remote villages, money lenders or “loan sharks” are quicker and require no collateral. When the loan sharks come to retrieve money, the farmers cannot repay the debt so wives are forced to repay the loan through sex.

One farmer in Jhansi, named Kalicharan, told The Telegraph that he had borrowed money to buy a water pump. When the money lender came for the repayment, he took his wife and three children.

“I told him to give me some time to arrange money but he forcibly entered my house and took my wife and children,” Kalicharan told the newspaper.

“The fact is in rural areas in times of distress where we are facing malnutrition, starvation, people do desperate things,” said Professor Prabhat Patnaik, an economist with the Centre for Economic Studies and Planning at Jawaharlal Nehru University in New Delhi. “We have not heard widespread reports, (but) it is extremely disturbing.”

India’s National Commission for Women sent a team to investigate the claims.

“It appears that money transaction has taken place and wife was sold,” said Yasmin Abrar, the lead investigator. However, Abrar explained that her team did not witness any transactions and she has called for a more comprehensive investigation.

Police in Jhansi, one of districts in the region, said they are looking into the claims but have made no arrests so far.

“There have been cases and we have received complaints as well,” Vinod Kumar, senior superintendent of police in Jhansi, told ABC News through an interpreter.

One sign of hope for farmers is the recent rains in the region which are expected to provide a strong start for this October’s planting season.

Girl raped at gunpoint by…

Half the districts in India…