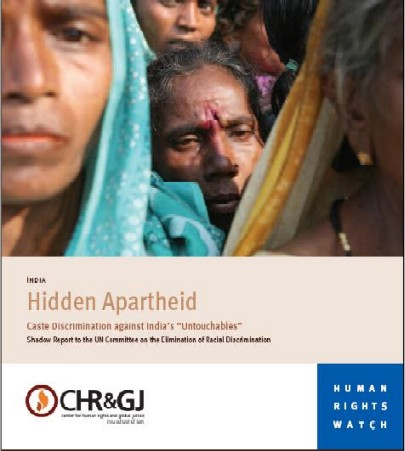 NEW DELHI: The ongoing session of the UN Human Rights Council in Geneva looks set to recognize caste-based discrimination as a human rights violation. This, despite India’s opposition and following Nepal’s breaking ranks on the culturally sensitive issue. Nepal has emerged as the first country from South Asia — the region where untouchability has been traditionally practiced — to declare support for the draft principles and guidelines published by UNHRC four months ago for “effective elimination of discrimination based on work and descent” — the UN terminology for caste inequities. In a side-event to the session on September 16, Nepalese minister Jeet Bahadur Darjee Gautam said his county welcomed the idea mooted by the UNHRC document to involve “regional and international mechanism, the UN and its organs” to complement national efforts to combat caste discrimination. This is radically different from India’s stated aversion to the internationalization of the caste problem.

Much to India’s embarrassment, Nepal’s statement evoked an immediate endorsement from the office of the UN high commissioner for human rights, Navanethem Pillay, a South African Tamil. Besides calling Nepal’s support “a significant step by a country grappling with this entrenched problem itself”, Pillay’s office said it would “like to encourage other states to follow this commendable example”.

The reference to India was unmistakable especially since Pillay had pressed the issue during her visit to New Delhi in March. Pillay not only asked India to address “its own challenges nationally, but show leadership in combating caste-based discrimination globally”. The granddaughter of an indentured labourer taken to South Africa from a village near Madurai, Pillay recalled that in 2006, Prime Minister Manmohan Singh had compared untouchability to apartheid.

Adding to India’s discomfiture, Sweden, in its capacity as the president of the Europeon Union, said, “caste-based discrimination and other forms of discrimination based on work and descent is an important priority for EU”. If this issue continues to gather momentum, UNHRC may in a future session adopt the draft principles and guidelines and, to impart greater legal force, send them for adoption to the UN General Assembly.

The draft principles specifically cited caste as one of the grounds on which more than 200 million people in the world suffer discrimination. “This type of discrimination is typically associated with the notion of purity and pollution and practices of untouchability, and is deeply rooted in societies and cultures where this discrimination is practiced,” it said.

Though India succeeded in its efforts to keep caste out of the resolution adopted by the 2001 Durban conference on racism, the issue has since re-emerged in a different guise, without getting drawn into the debate over where caste and race are analogous.