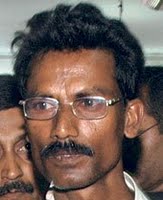 JHARGRAM: People’s Committee against Police Atrocities (PCPA) leader Chhatradhar Mahato, who was arrested on Saturday, has been charged with sedition and remanded in five days’ police custody. He also faces charges under the stringent Unlawful Activities Prevention Act (UAPA). A grim looking Mahato was produced before the Jhargram assistant chief judicial magistrate on Sunday, along with eight suspected Maoists arrested from Kantapahari and Kumarbandh on Saturday. No civilians, including journalists, were allowed into the court premises that was ringed by heavily armed securitymen.

Koushik Sinha and Prashanta Roy, counsels for the accused, claimed police had tortured Chhatradhar and the eight others so badly that they were unable to walk properly. The prosecution, however, argued that they were injured when they ‘‘fell down while trying to escape’’. Chhatradhar has been charged under various of the UAPA and is accused of raising fund for a terrorist organization, attempting to murder members of security forces and conspiring against the state to create terror. He also faces charges under IPC like sedition, waging war against the state, etc.

Some of these cases relate to ransacking and setting fire to Ramgarh police camp on June 15, and the explosions at Dalilpur and Kantapahari on Saturday, soon after his arrest. The other eight — Gorachand Hembram, Sajan Murmu, Subir Hansda, Hiralal Murmu, Baburam Kisku, Sagun Murmu, Ranjit Murmu and Sambhu Soren — have been arrested for allegedly triggering IED blasts after Mahato’s arrest. TOI

Kolkata, Sep 26 (PTI) The CPI (Maoist) tonight gave a call for a 24-hour country-wide bandh on October three in protest against the arrest of tribal leader Chhatradhar Mahato, who was spearheading agitations in Lalgarh area.

Terming the manner of the arrest as “unethical”, top Maoist leader Kishenji told PTI over phone, “The police disguised as journalists have arrested Chhatradhar and that is not only unethical but it also puts a question mark on the intergrity and honesty of the mediaperson in general.”

Kishenji, speaking from an undisclosed location, said, “The incident happened as we have always maintained a very good relation with the media and the police have taken the advantage of our faith.”

Earlier Mahato, the leader of People’s Committee Against Police Atrocities (PCAPA), was arrested from Pirka near Lalgarh when he was preparing to give an interview to a journalist, who was trailed by the police.

On Monday the day Vijaya Dashami will be observed all over the state intellectuals will sit on a dharna to condemn the arrest. They are demanding immediate release of Chhatradhar. On Sunday, a rally was taken out in support of the PCPA leader, projected as a “leader of people’s struggle”.

“The way Chhatradhar Mahato was arrested is illegal. Policemen have to be in uniform and disclose their identity before arresting a person. Police cannot impersonate as other professionals and carry out their activities. There is no provision in the indian legal system for the police to do so. The Indian Constitution gives Mahato the right to know why he was being arrested. We doubt whether he had been told at all,” said human rights activist Sujato Bhadra.

“Police have broken the law and should be punished for impersonation. They has violated the newly amended section of 50A of Criminal Procedure Code,” Bhadra added.

“Police claim that Chhatradhar is involved in 20-22 criminal cases. He had held meeting with state officials, chief electoral officer and even senior police officers. We suspect that he has been falsely implicated,” said Bhadra.

The president of Press Club Kolkata Premananda Ghosh said the way Chhatradhar was arrested would pose problem for journalists.

“We don’t have to say anything about the arrest. But posing as journalists they have endangered our lives. They even used Press identity cards. People will lose faith in journalists. We are protesting against this,” Ghosh said.

Former public prosecutor Kazi Shafiullah said that Mahato can lodge a case against police. “Legally there is nothing to stop police from doing so. But morally this is wrong. No one will talk to unknown journalists after this incident,” Shafiullah said.