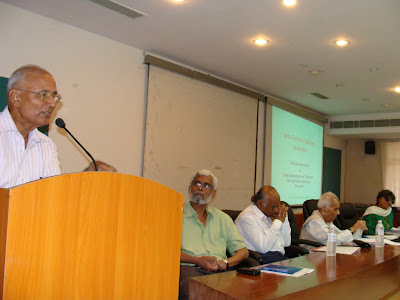 New Delhi: Governments are using ‘war on terror’ to suppress resistance of society against human rights violations, said Justice (Retd) Rajendra Sachar, adding that human rights violations cannot be tolerated in the name of terrorism. While delivering keynote address at the all India convention on State, Democracy and ‘Terrorism’ organized by the Jamia Teachers’ Solidarity Association at Jamia Millia Islamia in New Delhi today, Justice Sachar said that attack on human rights at large scale has weakened resistance power of people, so there is a need of such programs to strengthen the weakening voice.
Lambasting the governments for draconian laws, Justice Sachar said that when POTA was repealed all proceedings under it should have been stopped but the government did not do it but incorporated the most stringent part of the law into new anti-terror law. He reminded the audience how the obsession with security was seriously undermining the liberty of citizens. Political parties such as the Congress though promised the repeal of draconian laws such as the POTA when in opposition, once in power they put in place an even worse law, the Unlawful Activities Prevention Act (ULAPA 1967).

“Arresting of innocents in the name of terrorism, torturing them and then ruining their life in jails and then to say sorry will not be accepted,” he said.

Addressing the first session of the daylong program S.R. Darapuri, ex-IG and retired IPS officer of Uttar Pradesh, and currently Vice President of PUCL, said the composition of the police force, which had negligible Muslim presence was to a large extent responsible for its communal bias. “While in the last several years, thanks to reservation, the presence of other communities in the police force has increased but Muslims are still 1% in the force. On the basis of my 32 years in police service I can say the police is not secular,” Darapuri said while giving shameful examples of communal bias by the PAC in UP.

He urged human rights activists and groups to keep police reform on top of their agenda so that governments can be pressed for that. Giving figures about encounters in UP Darapuri said that from 2007 to till date the state has a share of 50% of all encounters in the country.

He also gave details about his fact findings in the cases of some terror accused including Shahbaz of Lucknow and Mufti Abul Bashar of Azamgarh, and concluded they are simply innocents. He highlighted unfair dealing of terror cases by the police while saying that Mufti Bashar who can’t ride a bicycle nor can operate a cell phone has been branded as a mastermind of terror blasts in the country and is facing 40 terror cases with 100-200 witnesses in each case.

Kavita Srivastava highlighted the continuing attack on the Bengali-speaking Muslims in Rajasthan and the uprooting of their colonies and their imprisonment on charges of being Bangladeshis soon after Jaipur blasts. The Ajmer blasts, she noted, had virtually unleashed a spate of illegal detentions of Muslim youth across the state, and not a single case has been filed against the police for illegal detention and torture.

She demanded that Ajmer blast should be properly investigated. Slain Maharashtra ATS chief Hemant Karkare had indicated that there was connection between Ajmer blast, Hyderabad blast and Malegaon blasts. For Malegaon blast Karkare had arrested about a dozen Hindu suspects, first time in India in terror cases.

Mukul Sinha, the lawyer for the family of Ishrat Jehan, presented a report on the encounters in Gujarat. He said that while the number of encounters in Gujarat may not be as high as in other states, Gujarat was significant because encounters were a political strategy to reap electoral victories for the BJP and to create the image of Narendra Modi as a Hindu icon. In particular, he focused on the evidences that proved the Ishrat Jehan encounter was staged.

Shafiq Mahajir, a senior lawyer from Hyderabad, presented a photo documentation of the police firing at innocent worshippers after the blasts in Mecca Masjid in Hyderabad. The photographic evidence he placed clearly proved that the police had fired with a clear communal intent; the worshippers were peaceful after the blasts and the police concocted stories that they were not allowing access to ambulances and pelting stones.

The second session was addressed by the representatives of various political parties.

Ali Anwar of Janata Dal (U) said that while one party is openly communal while another is covertly so. Subhashini Ali of CPI (M) condemned the NHRC for repeating the police version in the case of Batla House ‘encounter’ and said that if indeed the killed were terrorists, then it would have been better if they had been caught alive rather than killed.

Kavita Krishnan of CPI (ML) said that the war on terror has a clear mandate from the US; it is noteworthy that on the anniversary of 9/11, the Indian Home Minister was in the USA taking lessons from American government. She pointed out that issues such as secular agenda, terrorism, and foreign policy are not divorced but liked intimately to each other; a political movement needs to be launched. Ramgopal Yadav (Samajwadi Party) lamented that NHRC guidelines are never followed by the police, and this is leading to the disillusionment among people.

The Muslim League wants the central government to probe into the encounter killings including the Batla House encounter, said Dr MK Muneer, Muslim League Kerala state secretary. Muneer said that even though the party is an ally of the Congress in the UPA, the Muslim League is ready to be at the front of the group that meets the Prime Minister demanding probe into the Batla House encounter. Why the government fears a probe is beyond understanding. There is no Muslim-Sikh representation in agencies like the RAW. The stand of the media too should be criticised in the minority hunt. The media broadcast videos of Hajj repeatedly when saying about terrorism. This is a way to increase islamophobia, he added.

Dr. Javed Akhtar of Ulema Council expressed his anguish at the stereotyping of Azamgarh as the den of terror and said that the people of Azamgarsh only wished to live in peace and communal harmony.

At the end of the convention, Jamia Teachers’ Solidarity Association adopted resolutions demanding end to the culture of encounters, greater accountability on the part of police and end to communal witch-hunts.

Resolutions:
This house resolves to strengthen the movement for the demand of an independent and fair probe into the Batla House ‘Encounter’. It demands the Prime Minister to immediately institute a Judicial Enquiry into the ‘encounter’.

This house rejects the partisan and biased enquiry by the NHRC, which refused to take cognizance of the points raised by the civil rights activists, and which failed to even visit the site of the ‘encounter’ to meet possible eye witnesses and neighbors.
This house demands speedy justice for the accused and arrested youth. The filing of separate charge sheets in different blasts, even in the same city, implies that the trials will be prolonged for years. We demand that a mechanism of parallel trials be evolved in order to ensure the time-bound conclusion of trials.

This house notes with great alarm the communally biased torture and mistreatment of accused in the terror re
lated cases in the various jails across the country. In particular, the brutal violence in Sabarmati Central Jail on March 27, 2009, and the violence that SIMI accused were subjected to by Jail authorities in Jaipur on 21st September on Eid.

This house demands immediate punishment for the police personnel responsible for the extra judicial killing of Chungkham Shanjit and Rabina Devi in July 2009.

This house expresses outrage at the continuing arrests of democratic rights activists in Manipur and their torture in police custody. It demands the immediate and unconditional release of all those arrested in relation to the protests in the state since August 2009.

This house demands the repeal of Armed Forces Special Powers Act (AFSPA) from the states of Northeast and Kashmir, which has bred an atmosphere of impunity.

This house demands that the NHRC guidelines pertaining to encounter killings be scrupulously adhered to, and all those police and security personnel who indulge in extra judicial killings be booked under culpable homicide.

All those found guilty of implicating innocents as terrorists, as in the case where the Delhi Police Special Cell fabricated evidence to claim two young men as operatives of Al Badar, should be given exemplary punishment.

This house demands the Rajasthan government and the central government to investigate the Ajmer blasts, which the late Hemant Karkare, IG, ATS, Maharashtra was pursuing.

This house resolves to build a wide political movement for the defence of human rights and for the revamping of the state and national human rights commissions.

This house urges the Indian government to immediately halt the violence against the adivasis in Chattisgarh, Orissa, Jharkhand and West Bengal in the name of fighting Maoists.

The first session of the convention began by the release of the Hindi edition of the JTSA report on Batla House. The Hindi edition was released by Justice Sachar. Jamia Teachers’ Solidarity Association has announced setting up a fund for legal assistance of the youths picked up following Batla House encounter and made accused in Delhi blasts cases.