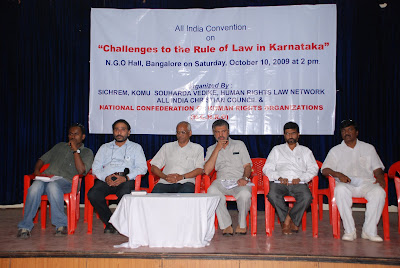 Bangalore, 11 Oct 2009: “Karnataka Organised Crime Control Act (KOCCA) is very dangerous and can be misused. It is a tool in the hands of government police force to implicate any youth. This law is violating human rights and thus needs to be reviewed” said Advocate K P Mohammed Shareef, Secretary General of NCHRO. He was addressing a convention on the topic “Challenges to the Rule of Law in Karnataka” at NGO hall in Bangalore yesterday.  The convention was jointly organized by some human right organizations such as SICHREM, Komu Souharda Vedika, Human Rights Law Network, All India Christian Council and National Confedration of Human Rights Organizations. (NCHRO)

Inaugurating the convention, senior advocate of Supreme Court Adv. Prashanth Bhushan said that the war in the name of terror which was declared by Europe and US has been adopted by India and several harsh laws were introduced here. He told that there are many innocent people who have been arrested and tortured by intelligence and security agencies under these laws. He made it clear that the human rights commissions were also getting careless in these types of cases while laws such as KOCCA are introduced to suppress the voices of human rights organizations.

Speaking on the occasion Mr. Matthew Philips of SICHREM said that the state is indulging in violence, mindless killing of innocent people and branding the minorities as terrorists. He warned the government that if the state doesn’t take care of law, the public will also not take care of it.

Mr. Kumarswany of All India Christian Council mentioned the cruelty against Christian Minority in the state by Hindutva organizations and strongly condemned the KOCCA.

“KOCCA was passed by Karnataka govt. without the knowledge of people. The police stations in costal Karnataka have transferred into the dens of Bajrang Dal” revealed general secretary of Popular Front of India Mr. KM Shareef.

Seminar on Human Rights in…

NCHRO writes to NHRC on…

Minority in India is Prime…

Release the innocents;Punish the guilty…

NCHRO Seminar at Bangalore on…